We are proud to be supporting the Where’s Your Head At campaign, which aims to change legislation so that mental health first aid is made obligatory in every workplace in England.

The campaign was started by Bauer Media Group (who own some of the UK’s most recognised media brands including, Kiss FM, Heat, Grazia and Empire) and has since been championed by celebrities and influential mental health campaigners – most notably, Natasha Devon.

The petition is addressed to Sarah Newton, the Minister of State for Disabled People, Health and Work, and calls for her to pledge to update the Health and Safety At Work Act to ensure that businesses have the same responsibility to provide mental health first aiders as they do medical first aiders. 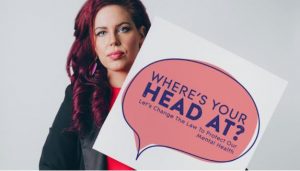 Natasha Devon MBE is an experienced health and social campaigner, who has received multiple awards and successfully influenced public policy in the past.

What is mental health first aid?

It is thought that 1 in 6 people will experience a mental health problem in the workplace. This said, common work-related experiences such as stress and anxiety are often dismissed as part of working life, which can lead to entrenched workplace stigma and an increased risk of worsening an individual’s mental health by not seeking help or advice on how to manage it.

Mental health first aid – developed by MHFA England – aims to change workplace attitudes towards mental health, provide employees with the resources they need to look after their own mental wellbeing, and better inform people about what to do if they think they are struggling.

As an organisation, Mind have recently been campaigning for more action to be taken around workplace mental health and have contributed to major reports surrounding the individual and economic impact of poor mental health in the workplace.

At Mind in Salford, a charitable objective of ours is to dispel the stigma surrounding mental health in the workplace, and help nurture healthier workers in Salford. We have been delivering mental health awareness training to organisations and individuals across the city for years, but welcome the development of the MHFA standardised package, and will be delivering it ourselves in the coming months.

We know how important it is that mental health is recognised with the same importance as physical health, and are fully behind the ‘Where’s Your head At’ campaign. Join us by signing the petition here.

This entry was posted on Monday, May 21st, 2018 at 1:08 pm and is filed under Blog, Campaigns, News. You can follow any responses to this entry through the RSS 2.0 feed. Both comments and pings are currently closed.