Debt, loan sharks and the impact on mental health

In the 21st century, the costs of modern living are abundant and ever-growing. Juggling life’s outgoings can be a tricky task for anyone, and financial struggles are a common occurrence not only in Salford, but nationwide.

One particular problem in the UK is the growing threat of loan sharks i.e. people that offer illegitimate, illegal loans. Typically, loan sharks will agree to lend money without any official paperwork or terms, leaving borrowers susceptible to dramatic increases in interest rates, which they are unable to repay. Loan sharks often use the threat of violence and blackmail to coerce victims in to keeping quiet and agreeing to their terms of repayment. Often but unjustly, loan shark criminals go unreported.

It is widely understood that debt and mental health are symbiotic. Research has revealed that 1 in 2 British adults with debt problems has mental health issues, and 1 in 4 British people with mental health conditions also have a debt problem (HCE Group, 2017). For those entrapped in agreements with loan sharks, the repercussions for their mental health can be severe. The stress, anxiety and fear instilled by growing costs and persistent threats enough to bring on a period of mental ill-health, or intensify someone’s existing conditions. 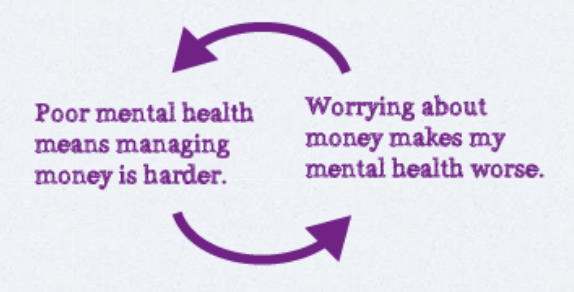 To clamp down on the prevalence of loan sharks, a new campaign designed to encourage victims to come forward and report loan sharks was launched this month. The ‘Why I Borrowed’ campaign, started by The England Illegal Money Lending Team (IMLT), aims to expose loan sharking as a crime, tell real life stories of those who have been affected, and help people to free themselves from the illegal entrapment of loan sharks.

Nationally, Illegal Money Lending Teams have secured more than 380 prosecutions for illegal money lending and related activity, leading to nearly 328 years’ worth of custodial sentences. They have written off £72.5 million worth of illegal debt and helped over 27,500 people.

As the ‘Why I Borrowed’ campaign has highlighted, involvement with loan sharks can have a particularly hostile impact on mental wellbeing; a recent study by IMLT revealed that over 60% of borrowers said they were in a state of worry, stress, depression or severe anxiety because of their involvement with a loan shark. This said, poor mental health as a result of financial strain can manifest itself in many ways.

Here at Mind in Salford, we offer advice to those struggling with debt, as we recognise that tackling such problems alone can be overwhelming and potentially detrimental to mental health. We offer one-to-one, confidential support; helping clients gain perspective by looking in to their rights, and developing a plan for the future. Recently, our team have assisted a client with extensive debts to recoup thousands through recovering mis-sold PPI, and challenging a ruling on the client’s benefits allowance. As a result, our team secured thousands for the individual – a truly transformative amount – enabling the client repay their debts and regain control of their life once again.

If you’ve got money troubles, it’s important not to feel embarrassed about seeking help, because it really could happen to anyone. Our debt and welfare advice services revitalise many people’s ability to plan for the future – a freedom that should be enjoyed by everyone, regardless of their background, income or mental health.